March's blog was written by my daughter, Melanie, and addresses the needs of  "functioning" sick people. Melanie has chronic neurological Lyme disease and knows where of she speaks. Melanie presented this as a speech for Toastmasters and won 3rd place in their International Speaking Contest. 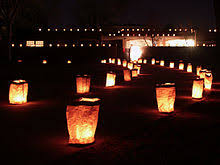 I can change the world, with my own two hands

Let me ask you something.What does it take before you will do something for someone else? If you knew it didn’t have to be something big, like money, or even a huge amount of your time, would it change your answer in any way? How many of you are thinking, “Well…it depends.”?

A couple of months ago, I was listening to a storytelling podcast called “The Moth” and heard the story “Luminaria” by Denise Scheurmann. This story centers around the time when she was 15 years old. Her dad was terminally ill and in the hospital during the holiday season. As you can probably imagine, she, her mother, and her brother were consumed with everything they were having to deal with. They felt alone, and the holidays were not on their minds AT ALL. As they were coming home from the hospital on Christmas Eve, they noticed as they entered their neighborhood that the luminarias were lit. It was a tradition in their neighborhood to light them each year and place them along their driveways and sidewalks to welcome in Christmas. They thought, “Our house will be the only one not lit up”, and that just got them even more down. But as they drove up to their house, they saw that their luminarias were lit. An anonymous neighbor (or neighbors…they never did find out) had decided to do something for this family to make sure they felt included in the neighborhood tradition.

That may seem like a small thing, but to this family, it meant the world. Denise said it made them realize they were not alone, and that people cared. In fact, she said that years later, when she was going through a divorce, remembering what her neighbors had done all those years ago helped her get through many dark moments.

Denise’s story resonated with me, because it made me think of my own story a bit. For those of you who may not know, I was diagnosed with Chronic Neurological Lyme Disease in late 2012. That diagnosis came after more than a year of knowing that SOMETHING was wrong with me, but not knowing exactly what.I spent thousands of dollars on tests that showed nothing definitive. I thought I was crazy because many doctors told me it was all in my head or was just due to “stress”. I lost many important people in my life because they couldn’t deal with me talking about it so much and thought I was just looking for attention. During that time, and many times since, I’ve often felt alone. Lyme Disease has taken over my life.

However, God has amazing timing. He has placed several people in my path who have done for me what Denise’s neighbors did for her on that long ago Christmas Eve. They’ve made my world a better place, and they probably don’t even realize they’ve done anything at all.

I’m what you call a “functioning” sick person. You might be asking, “What does that mean?” Well, I go to my job, and I take care of myself and my family most days. I even exercise pretty regularly.Most people don’t even realize I’m sick. I don’t LOOK sick.Many people think, “If she’s REALLY sick, then shouldn’t she be in a wheelchair or something?” People don’t have a clue how to deal with someone like me. They don’t understand how many things I love that I’ve had to give up in order to “function” and make it through each day without being a burden. It can be pretty lonely.

In hopes of finding anything that could help me make sense of what I was dealing with both physically and emotionally, I stumbled across a blog called My Color is Lyme, written by a woman named Jennifer. Her post, Confessions of a “Functioning Lymie”, brought me to tears. It was like I wrote that post! The whole time I was reading, I was nodding my head in agreement, exclaiming, “Yes…YES! That’s it, exactly!” Like me, Jennifer struggled with various health issues for a long time before finally getting a diagnosis. Like me, she “functions” by being able to continue going to work each day and taking care of herself and her pets. And, like me, many people in her life walked away because they assume she is fine and should stop complaining.

People suffering, but “functioning”, like Jennifer and I, don’t usually feel comfortable putting their stories out there for the world to see, because they’re afraid of backlash and more abandonment. But Jennifer decided to do something, and by sharing her story, she has given me (and I’m sure many others) a bit of hope. She had the courage to put into words what I was unable (or, if I’m being honest, unwilling) to.

You never know who might be going through a tough time.There have been others who, like Jennifer, have made me feel less alone. Sometimes simply asking, “Is there anything I can do?” is enough.

Think back to Denise’s story.It probably took all of 5 minutes to light those luminarias. No big deal. But what WAS a big deal was those neighbors decided to do something; a something that meant the world to this family, giving them a bit of happiness not just for that evening, but for a lifetime. To this day, that small gift is still giving Denise some comfort.

At the end of her story, Denise challenged her audience to write their names and numbers down and give it to someone right then and there, as a reminder that they are never alone. How powerful is THAT? Another example of something that seems like a small thing to do. But imagine how it would feel to someone who is going through a tough time, someone who feels like they’re all alone in the world…imagine how seeing that little note from you might be what is needed to lift them up and remind them that someone cared enough to do something.

Author Samuel Johnson said, “The true measure of a man is how he treats someone who can do him absolutely no good.” I ask you to think about that for a minute. What is the something that YOU can do to make the world a better, kinder place…with your own two hands?
Posted by Linda Goodman at 2:37 PM