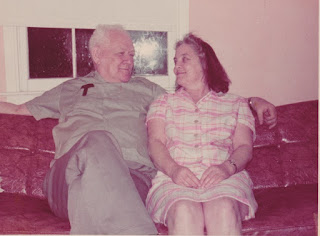 ©Linda Goodman 12/31/2016
I am the child of two parents who were abused as children.  When I say abused, I do not mean that they were spanked.  My mother literally went to bed at night not knowing if she would live to see another day.
When my maternal grandfather, my mother’s abuser, passed away, my mother refused to attend his funeral.  On the day he was buried, I went to my parents’ apartment after work.  I found my mother sitting in her bedroom rocking in the dark.
I sat down on the bed beside her, and by the light of the moon, I could see that her face was streaked with tears.  I took her hands in mine and said softly, “Mama, he was a sick, sick man.  But in his own way, he did love you.
She looked at me like I was insane! She quickly leaned forward and raised her hand in a fist.  I fully expected her to strike me.  But then she let out her breath, leaned back against the rocker, and sighed, “I reckon he did.  I reckon he almost loved me to death.”
Thus began my journey to try to understand the violent heritage from which I had been spared.  Several women who had lived through similar circumstances, and who shall remain nameless, answered my call and took me on journeys that changed my life forever.  They had walked through the fire and had come out victorious.  Their amazing strength and courage moved me to write and perform stories that honor their walk. The result was Shattered Silence.
Shattered Silence consists of four stories. Parts of these stories may be offensive.  I make no apologies for that.  While not graphic, these stories are not pretty.  They are not fairy tales. They are real life, and real life can be ugly.
If you take this journey with me, know that no matter how narrow or how long the tunnel, there is a light at the other side.  Regardless of how it begins, life can be so sweet!
Shattered Silence is a love letter to my mother, and to all innocents who were robbed of their childhoods by monsters.
I have not performed Shattered Silence in a few years, but just this week someone who saw me perform this show at a MAST Conference in the latter 1990’s called to tell me that she still carries those stories in her heart. Maybe it is time for me to take this show off the shelf and start performing it again.

The photo in the upper right hand corner pictures my father and mother in 1972.