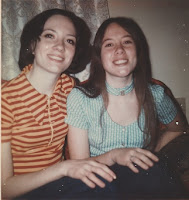 My baby sister Evelyn and me in our middle teens

I have always loved my baby sister, Evelyn. She is beautiful inside and out.
When I was six years old, Evelyn was three. At that age her thick, straight golden hair hung to the middle of her back. Sometimes our mother would plait Evelyn’s hair, or use rubber bands to make two pony tails, one on either side of her head.
Evelyn’s eyes were the purest color of blue. Their color was deep, but there was a silver glint to them, or so it seemed to me.
Evelyn was a happy, healthy child who played outdoors all day long when the weather allowed it. As a result, her skin took on a rosy hue. Sometimes she would get a bit of sunburn on her cute up-turned nose, and it would peel; but even that did not distract from her beauty.
My best friend Carole also had a baby sister. Her sister’s name was Ann, and she, too, was a beautiful little girl. She was the same age as Evelyn, but her hair was pearl white, not golden. Her eyes were emerald green, and she had a bridge of freckles across her cute, up-turned nose. She spent the summer outdoors wearing nothing but her underpants. I couldn’t believe her mother let her do that.
One day, Carol and I were sitting on the cement steps in front of my apartment building. We were watching Ann play in the sandbox my daddy had made.
“Don’t you think Ann is beautiful?” Carol asked me.
“She is very beautiful,” I assured her. “I think she is the second most beautiful girl in this neighborhood.”
“Second?” Carole was astounded. “Who do you think is more beautiful than Ann?”
“My baby sister Evelyn, of course,” I said.
Carole was starting to get mad. “Take that back!” she yelled.  “You know that Ann is the most beautiful! Look at her! She has pure white hair. Just like an angel”
“The Bible doesn’t say what color angel hair is,” I informed her. “Besides, my baby sister has golden hair. Golden is more beautiful than white.”
“Your baby sister’s hair is not gold. Her hair is the color of a graham cracker,” Carol insisted.
“That is not true,” I barked back at her. “Evelyn’s hair is so golden that every six months we take her to the beauty parlor to get it cut. The beauty parlor gives us $100 every time they cut Evelyn’s hair, and then they make wigs out of it. Those wigs sell for $500.”
“So what?” Carol replied. “Your sister’s nose is always peeling. You can’t even enter a beauty contest if your nose is peeling.”
‘That’s not true!” I told her. “I watch the Miss America Contest every year, and over half the contestants have peeling noses. I already talked to the president of the pageant about it, and they have already signed my baby sister to be in the pageant in 1968! My daddy has a contract!”
“You are a liar,” she accused me. “Nobody makes wigs out of your baby sister’s hair, and you don’t know anything about the Miss America pageant except that your baby sister isn’t going to be in it.”
Carole stood up and started to walk away.
I stood up and hollered loud enough for the whole neighborhood to hear, “At least my baby sister doesn’t run around the neighborhood in her underpants all summer!”
Carol turned back to face me. She shook a fist at me and seemed ready to rumble, but suddenly a big, goofy smile came across her face. The smile turned into a laugh. She was laughing so hard she could barely breathe. So were neighbors who had been paying attention to our argument.
I turned around to we what was so funny.
There stood my beautiful baby sister Evelyn…. wearing nothing but her underpants. I started to yell at her, but I lost control and started laughing along with everyone else.
Evelyn paid no attention to the laughter. She stepped into the sandbox and started playing with Ann.
“My sister is the smartest girl in the whole neighborhood,” said Ann.
“That’s not true,” Evelyn insisted. “My sister is even smarter than her.”