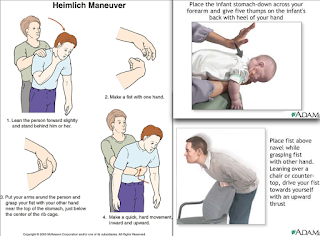 A decade ago my husband, Phil, and I were having dinner at a restaurant in Chester, Virginia. I was about halfway through my salad when an elderly woman came running to our table crying,  “Please, please, help my husband! He’s choking, and he can’t breathe!”
Phil immediately stood up from his chair, rushed over to the man, picked him up out of his chair, turned him around, wrapped his own arms around him, and administered the Heimlich Maneuver. On the second rapid squeeze, a huge (for one swallow anyway) piece of steak came flying out of the man’s mouth and landed on the floor.
The quite shaken woman thanked Phil profusely, and the man even offered to pay for our dinners. “Nonsense!” Phil told them. “You could have approached anyone in this restaurant, and they would have done the same.” We left the restaurant without leaving our names. Nor did we get their names. I felt extremely proud of my husband. He acted like it was nothing, but he had saved a man’s life.
A week ago, I myself had the opportunity to administer the Heimlich Maneuver for the first time.  Because of a problem with my well, I was doing laundry at my daughter’s house. I was in her bathroom when I heard her choking. I called and asked if there was anything wrong, but there was no answer, just more choking.
Without a second thought, I ran into the kitchen. Her face was a drink crimson, and she was gasping for air. I ran up behind her, put my arms around her, and squeezed for all I as worth; one time; two times; three…..nothing….she continued to choke.
“Don’t worry,” I hollered. “I’m going to call 911.”
I picked up my cell phone and started to dial, but I was so frantic that I could not remember her street address, or even the name of the town she lives in. I thought it was all over; that I was going to lose my only child because I could not remember her address.
Suddenly the choking stopped. She was still gasping, though the air was now getting to her lungs.  Deep sobs wracked her body. “I thought I was going to die,” she cried, once she was in control of her breathing again.
It turned out that she had not needed the Heimlich Maneuver at all. She was having a throat spasm, one of the many symptoms of a chronic disease that she is fighting. This was the worst spasm she had ever had to deal with.
Still the situation made me realize that I need a refresher course on CPR and the Heimlich Maneuver. I figure that if I review these procedures over and over again, I will have the confidence I need to be able to perform them when necessary.
I also make sure that my address book is with me and up to date at all times. A daughter is a precious thing. I will not lose mine because I cannot remember her address.

(Now that this whole incident is behind me, and I have had time to process it, it makes me think of the movie The English Patient. Kristen Scott Thomas’ character died because the man she loved had a name that was too difficult to spell. Details are important.)
Posted by Linda Goodman at 4:10 PM No comments: