The Dim Smoky Past

After I left the state of Virginia to move to Michigan in 1983, I missed my father’s stories.  Knowing that they had never been documented, I asked him to include one of them in each of his weekly letters to me.  Every week thereafter, each of his letters ended with what he called a Scene from the Dim, Smoky Past.   When I asked him to explain this title, he replied that the passage of time had cast a hazy film across his memory.  He could not be sure that things happened exactly as he remembered them.  His interpretation of events, he explained, was much more clear to him than the events themselves.  I find this to be true of my own life experiences, as well.
To illustrate my point, I am publishing on this blog two versions of the same incident. The first is my memory. The second is my daughter's. Notice how different the versions are; yet each of us swears that that her own version is the truth, even though that is not possible.
Here is my version:


Orphan Girl
©Linda Goodman, January 2015
In 1972, after a ridiculously easy three hours of labor, I gave birth to a baby girl. After the anesthesia had worn off, a nurse brought her to me and I got my first good look at her. I gasped and cried, “THIS IS NOT MY BABY!”
“Of course it’s your baby,” insisted the nurse.
“But she has red hair!” I protested. “No one in either my or my husband’s family has red hair!”
“Well,” said the nurse, “that can’t be true. Red hair is a recessive gene. Red hair has to be in both the mother’s and the father’s families for a redheaded baby to be born.”
After asking family members a lot of questions, I learned that my mother’s twin brother had red hair before he went gray. I also learned that several of my husband’s aunts had red hair.
So in addition to a new baby, I also got a new story that I could use to entertain friends and family. Every time that someone asked me where my daughter Melanie’s red hair came from, I told that person the story of the day she was born, and how I had insisted that she could not possibly be my baby.
When Melanie was eight years old and in the second grade, I went to an open house at her school. Each student in the school had been instructed to make from construction paper an art piece that would tell people something the student. I walked around the room and looked at the different projects. Roller derbies were quite popular at the time, so many of the students had made construction paper skating rinks and named the rinks after themselves.  Two students built churches. Another built a Tastee Freeze ice cream stand. Melanie had constructed a large paper house  and had written across the front  The Melanie Adams Orphanage.
I was curious. “Why did you decide to build an orphanage?” I asked Melanie.
“Because I’m an orphan,” she replied.
Curiosity turned into confusion. “Why do you think you are an orphan, Melanie?”
“Because you said so,” she sweetly told me. Then, with an innocence that only a child can muster, she added, “I am glad they gave me to you. I hope they don’t take me back some day.”
I could not believe what I was hearing. “When did I tell you that you were an orphan?”
“Oh, you didn’t tell me,” she said. “But I heard you tell Mrs. Michaels.  And Mr. Hamby.  And that old woman who asked you where I got my red hair.”
I had never even realized that she was listening. Melanie had thought she was an orphan for eight years, and I never even suspected that.
Of course, I set her straight. She seemed rather disappointed when I told her I was only telling a funny story to all those people; that she really was my child by birth.  “I guess I won’t be as interesting now,” she sighed,” and some poor parents out there are going to be so sad when they find out that I am not their child.”
That’s my girl! 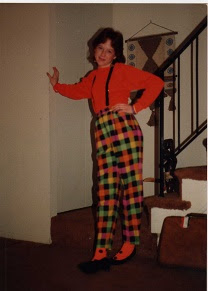 And this is Melanie's version of the same story:


Little Orphan Melanie
(c)Melanie Goodman Deal, January 2016
There I was, five years old, sitting on the floor in my living room. I was playing quietly by myself, coloring a picture and listening to the conversation my mom was having with a new neighbor that had moved in. As I sat there coloring, I heard the neighbor exclaim to my mom, “Your daughter, Melanie, has such BEAUTIFUL red hair! Where did she get it from?”
To which I promptly replied, “It must be from my REAL mom. I’m an orphan, you see, and this kind woman adopted me so I could have a family.”
My mom immediately stammered out, “D-don’t be silly, Melanie! That’s not true at all!” Then, to the neighbor, she said a little more quietly, “I don’t know where she gets these crazy ideas from…let’s go in the kitchen and get some coffee and snacks.”
I turned back to my coloring, wondering why my mom said that. Why was she embarrassed to admit I was an orphan? It was true, after all. I heard her say so myself.
You see, all my life, I’d heard people ask my mom this same question, “Where did Melanie get her red hair from?”
And every time, my mom always replied with the same answer – “Well, I wondered the same thing myself, since I don’t have red hair and neither does her father. I swear, they must have switched babies on me in the hospital! There’s no other explanation, is there?” And then she’d laugh and move on to the next topic.
What my mom didn’t realize was that I was listening all those times she said that. And the more I heard her say it, the more I started wondering.
Who was my real mom? Did she have red hair like me? Did she suspect the baby she got at the hospital wasn’t hers? If she did, did she wonder where her REAL baby was? Was she even LOOKING for me?
I was an only child, but what if my REAL mom had other kids? Oh my Goodness, I might actually have brothers and sisters! Did they have red hair, too?
All of this wondering got me excited. So excited that I had this whole story made up in my head about what my REAL family must be like.
You see, my parents divorced when I was two. So at the age of five, it was just me and my mom. I didn’t really relate well to other kids my age, so I hung out with the adults most of the time. In fact, my doctor always joked that I was a 42-year old inside a 5-year old body. I guess you could say my thinking was more advanced than that of the average five year old.
More than anything, I wanted a family. A mom, a dad, and maybe a brother or sister – or even better, a brother AND a sister! All living in the same house. So in my imagination, my REAL mom didn’t have a job she had to go to all the time. She got to stay home and play with me and my siblings, and was able to cook homemade meals every day. And my REAL dad was home every night, because there hadn’t been a divorce. And my siblings were the coolest! We played together all the time, and I never had to play alone and make up imaginary friends, because I had THEM to play with!
After the neighbor left, my mom came into the living room where I was playing, and she got down on the floor with me. She looked at the picture I had just finished coloring and her eyes got kind of big. My picture was of a big brick building, and there were lots of kids’ faces peering out of the windows. There was a big sign on top of the building that said, “The Melanie Orphanage”.
She put her hand in mine and asked me, “Melanie, why did you draw this picture? And what on EARTH makes you think you’re an orphan? I am your real mom. Don’t you know that?”
So I told her what I’d overheard her say all these years, and as I finished, her face fell and grew very sad, and her eyes got all wet. “Oh, honey!”, she said. “That’s just a joke. I just say that to get a laugh out of people, but it’s not true. You’re mine. All mine. And I love you to the moon and back.”
My advanced five year old brain pondered her words for a few moments. I thought about all the things she did for me all the time. Telling me stories, tucking me in every night, taking me to see my cousins and my grandparents whenever I asked, buying me ice cream when she had the extra money. Telling me she loved me every day, and giving me hugs and kisses more times than I could count.
On their own, words have no power. It’s the emotional connection we attribute to them that allow them to affect us the way they do. My desire to have a “real family” was so strong that I allowed myself to believe what my mother joked about.
That day, my mom realized the impact words can have, but I realized something as well. My family may not look like other people that I knew, but I already had my real family -- the one meant for me. And that was better than anything I could make up.
Postcript from Linda: And there you have it. No wonder I don't enjoy telling family stories to my own family. We all remember events differently because we are each telling from our own perspectives, and each of us believe that our own version is the correct one. Try this with your own family. You will see what I mean.  Happy tales to you!