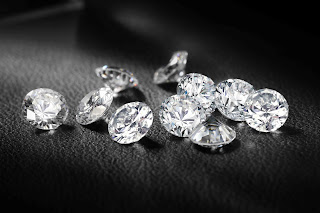 In Christmas 1996 my husband, Phil, got a good bonus and used part of it to buy me a pair of diamond stud earrings as a gift. A year later, he bought me a necklace with a water fall of diamonds as a pendant.
Except for my engagement ring (bought at a pawn shop) I had never had such fine jewelry.  Not only that, I had nowhere to wear it. Weddings, funerals, and Phil’s annual Christmas party were the only events we attended that required us to dress up. Phil lost his job shortly after giving me the necklace, so the party was no longer an option.
In 1998 we moved to Richmond, Virginia. We attended two weddings during our first year there, and I wore the earrings and necklace to both of them. Ten years passed before I wore those diamonds again.
In 2009 I went to work as a senior accountant for an agency in downtown Richmond. Employees of the agency were required to wear business suits to work. That December, a Christmas party was held for the agency employees.  “Not the gala my husband’s company used to have,“  I said to myself, “but a good enough excuse to take the diamonds out of my closet.”
When I first started working in Richmond, a few friends warned me to be careful. One had witnessed a robbery at a downtown bus stop. Another had been the victim of a purse snatcher there. I actually rode to work in a van pool that deposited me right at my office door in the morning and picked me up there in the afternoon.  I was not concerned with being robbed.
Besides, it was winter. It was cold. I would be wearing a winter coat and scarf over my suit, so no one outside my office would even know that I was wearing diamonds.
The party was held in our conference room. Caterers set up a delicious spread for us, and we exchanged gifts with one another. Several of my co-workers complimented me on my sparkling diamonds.
And then – a surprise! We were to get half a day off. We could leave to go home right after the party.  I called the driver for my van pool and told him that I was leaving work early and would take the bus home.
I walked across the street from my office and over to the next block to wait for the bus. There were two men already waiting at the bus stop when I got there. One of them was wearing jeans and a Richmond Braves tee shirt. The other was wearing a dark, hooded windbreaker, and one of the legs of his jeans had been rolled up above the knee.  What a strange fashion statement, I thought, as I took off my coat and scarf folded them across my left arm.  The day was unusually hot for December.
A few minutes later a woman approached the bus stop. She walked right past the men and stopped to stand beside me. After staring at me for a moment, she exclaimed “I just love you hair!”
“I like your hair, too,” I replied. She did indeed have lovely, gray hair.
We stood together in silence for a few more minutes. “What bus are you waiting for?” she asked.
“Chesterfield,” I answered.  “I’m a bit early.”
“Why don’t you come with me to the bus stop around the corner?” she suggested. “ It’s safer.”
“My bus doesn’t stop there,” I told her. “After it leaves this stop, it goes straight to I 95.”
She looked over her shoulder and then turned back to me. “Do you see that man with the one jeans leg rolled up?” she asked. “He means to do you harm. He’s a bad seed.”
I looked at the man. He was glaring at the woman. In fact, if ever there was such a thing as an evil eye, he possessed it.
“Come on,” the woman urged. “I’m trying to help you.”
Suddenly, I was no longer in my comfort zone; but I knew that my bus did not stop at the location she was suggesting.  “ I have to catch my bus here,” I insisted.
Just then a bus rolled up to the stop. The man in the Braves tee shirt walked up to it, then looked at the man with the rolled up jeans leg and asked, “Aren’t you coming?”
“I’ll wait for the next bus,” he growled. As the bus pulled away, my heart pounded. The man scowled at the woman standing beside me. She hissed at him. He hissed back. She looked at me and said, “I tried to warn you.” Then she walked away, disappearing around the corner.
I looked at the man. He was staring at me. There were no other people on the street. In my mind I ran through my options: run back to my office; scream; walk out into traffic. I waited for his next move.
“Lady,” he said, “You shouldn’t be wearing them diamonds on display so anybody can see them. There are some bad people in this town.”
I had forgotten I was wearing diamonds.  With my coat and scarf removed, they were visible to anyone who walked by.
“I’ll stay with you until your bus comes,” the man told me. “But next time you might not be so lucky. That woman is a bad seed.”
Five minutes later, my bus arrived. “Thank you,” I said to the man. “You are a gentleman, and today you have been my guardian angel.”
“I ain’t no angel,” he insisted. “Next time you come to town, leave them diamonds at home.”


I took his advice.
Posted by Linda Goodman at 8:37 PM