I was an eight-year-old second grader when I saw the moving truck pull up to our apartment building. The apartment below ours was empty, so we could stomp on our floors without worrying about the noise we made. We were going to miss that.

I watched as the moving men brought all the furniture into the apartment. Once the movers had finished unloading, the family that would be occupying the apartment arrived. The father was skinny and tall and wore a tee shirt that said FOLLOW ME TO JESUS on the back. The mother was plump and happy. Her thick eyeglasses looked like they had been made by the Coca Cola Bottling Company. Between the parents were three boys. The youngest one looked to be about my age. Just one look at that boy made my heart pound. I had never been interested in boys before, but that was about to change. He looked at me through bright his hazel eyes and I knew right away that I was a goner.

The next afternoon, Brother Lee and Brother Allen invited those boys to go to the baseball field with them and play some catch.  All three of them went. When they got back home in the late afternoon, they looked tired and happy at the same time.

That evening, I asked Brother Allen what the boys’ names were. He said, “Tommy, Danny, and Mikey.”

Trying not to appear too inquisitive, I asked, “Which one is the youngest?”

“That would be Mikey, and he’s too little to play baseball,” Brother Allen complained. Suddenly his eyebrows shot up and he said, “Wait a minute. Are you in love with Mikey?”

“I ain’t in love with nobody but Jesus,” I insisted. But that was a lie.

The next morning as I was walking to school, I saw Mikey, walking all by himself. I ran to catch up with him.

“Hi, Mikey. I’m Linda,” I told him breathlessly. “Why are you walking by yourself when you’ve got two brothers?”

“They think I’m too little to walk with them. I can’t keep up,” he explained, then asked, “How do you know my name?”

I must have been bolder than I remember, because, without hesitation I blurted out, “I want you for my boyfriend. “

He looked at me like I was crazy. “My mama says I can’t be a boyfriend until I’m at least 14 years old. I’m only eight.”

“What she don’t know won’t hurt her,” I protested.

“It don’t work that way with my mama. She knows everything,” he replied. Then he took off running and howling like he was being chased by a banshee.

I was not about to let him get away with that, so I started running after him, yelling, “Mikey, I am going to catch you and kiss you!”

He just ran faster, and I could not catch up with him.

The following morning, I watched out the kitchen window until I saw him walk out of our building. Immediately I ran down the stairs and out the door chasing after him. Once again, I yelled,  “Mikey, I’m going to catch you and kiss you!” Once again, he started running and left me behind in a cloud of dust.

They say that the third is the charm, but that was not true in my case. I chased that boy to school for two weeks, and never even got close to kissing him.

Once cool, brisk Monday morning, however, I woke up with a runny nose, a sore throat, and watery eyes. I also had a hoarse cough.  Mama said I should stay home.

I was tempted, but I could not even imagine a day without Mikey. “It’s just a cold,” I said. “I’ll be fine,”

I began my day as usual, finding Mikey and running after him, arms opened wide so I could grab him when I got close enough to kiss. As always, he ran faster than me.

Suddenly, I stopped. I remembered that colds are contagious, and I could not bear the thought of cute little Mikey, my almost boyfriend, getting sick because of me.  I started walking to school at my regular pace. That kiss would just have to wait.

Imagine my shock when I realized that Mikey had stopped running. He wasn’t even walking. He was standing still, waiting for me.

Before I realized what was happening, he wrapped his arms around me and gave me a big, sloppy kiss on my lips; but it was a long kiss, and I could not breathe through my stuffed up nose.  I struggled to get away.

When the kiss finally ended, he said, “Wow! I must have really turned you on. You couldn’t even catch your breath.”

The next morning Mikey had a cold and stayed home from school. I guess girls are tougher than boys.

As for me, I did not chase him anymore. Kissing was not what it was cracked up to be. 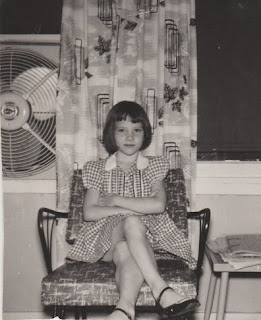