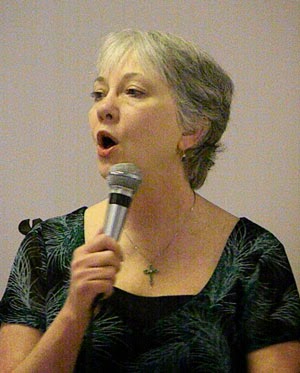 At the International Storytelling Center in Jonesborough, Tennessee

This information may be subject to change; Stories in parenthesis are alternates.

Tuesday: A Little Bit of Kindness….

Wednesday: Daughters of the Appalachians

Thursday: Memories of a Former Kid

The Dismal Swamp
The March

Saturday: Scenes from the Dim Smokey Past

The Punishment
The Mustard Seed
The Marriage Contract
(Buyer Beware; No Elvis)

Now in its 13th season, Storytelling Live!—the International Storytelling Center’s renowned teller-in-residence (TIR) series—features a lineup of 26 nationally-known storytellers in Jonesborough, Tennessee. For a complete listing of tellers and their schedules, please go to:  http://www.storytellingcenter.net/events/storytelling-live/
Posted by Linda Goodman at 11:33 AM 8 comments:

On Fees for Professional Storytellers

I was happy to see Katie Knutson﻿'s article A Handful of beans or One Gold Coin: How to Price Your Work in the August/September issue of Storytelling Magazine. Lots of good advice there.When I first started telling professionally in 1989, NAPPS (The National Association for the Perpetuation and Preservation of Storytellinghad had just released a survey that stated that good beginning storytellers averaged $100 for a one hour show. Based on that info, I began using that rate and it worked well for me in those days.

The first storyteller I ever heard was "G", and she was beyond wonderful. To this day she remains one of my favorite tellers. But G was one of the fortunate few who worked for an organization that paid her a yearly salary (with benefits) to go to schools and libraries to tell stories. She retired a few years after I first heard her, but she decided to continue telling stories on her own with a less  strenuous schedule.

One day I received a phone call from an elementary school that wanted me to tell stories to its students. When I quoted my fee (by this time, in 1999, $150), the woman gasped. "But G charges only $50.00!" After a short period of silence, she added, "But she LOVES what she does."

I explained to her that I also loved telling stories, but, unlike G, storytelling was my only source of income. G, on the other hand, had a pension and medical insurance, which she received whether she told stories or not. I also mentioned that I could not with good conscience undercut my fellow tellers.  The two of us began dickering and finally agreed that I would tell for G's fee, but for only 30 minutes, on the condition that if I was ever asked back to the school, I would get paid my full fee. I could live with that. It was like I was getting paid to audition.  I was actually asked back to that school numerous times before I left New England, and even afterwards.

When I move to different areas of the country (I have done this four times since 1989), I enjoy working locally. I usually ask some of my fellow tellers what the range of fees is for the region. I ask only because I do not want to undercut another teller's rates; and, I admit, it saves me a lot of time and research.  Usually, however, other tellers are understandably reluctant to share. The stock answer is, "It depends." And so I do all the work that Katie Knutson so kindly details in her article. In the process, I usually am given contact information for possible venues, which nearly always results in work that leads to more work.

Whenever a fellow storyteller contacts me about fees, I share freely. I consider that part of my contribution to the storytelling community. As far as I know, that has never worked against me.
Posted by Linda Goodman at 10:58 AM 5 comments: