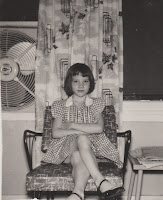 One summer Sunday afternoon in 1961, our friend Terri spent the afternoon playing with my baby sister Evelyn and me. We were having a lovely time sharing Barbie clothes, playing Go Fish, and telling stories on our neighbors. Terri confessed that she was having so much fun that she did not want to go home.

My sister and I both laughed. Neither of us had ever spent the night out before. Mommy was adamant that spending the night out was not an option for her children. Neither were we allowed to have someone else spend the night with us. “Parents get enough trouble from their own young’uns,” Mommy said. “They don’t need other young’uns thrown into the mix,”

Terri and Evelyn declared the situation impossible, but I decided to play Devil’s advocate. “I think that if we use our smarts, our talent, and our creativity, we can get Mommy to say okay,” I insisted.

“How are we going to do that?” Terri wanted to know.

I thought for a few minutes, until I came up with an idea. “I think we should make up a song to sing to her. And we could dance, too,” I proposed.

“How are we going to do that?” asked Terri.

“First we have to think of a name for our group. Do either of you have a name you like?” I inquired.

Terri thought The Singing Girls would be a good name. I told her that would not work. Why, in no time we would have to change it to The Singing Women.

Evelyn liked that name Three Little Kittens. I told her that sounded more like a nursery rhyme that a singing group.

I could see clearly that I would have to think up a name myself. I examined each of us thoroughly and noticed that all three of us were wearing Trotters, black flat shoes with pointed toes. Every girl in school was wearing those shoes.

“I think that we should call ourselves the Trotters,” I announced. Terri and Evelyn thought that name was a winner, and so they agreed to it.

I wrote an introduction and a song in seconds, and for the next two hours we rehearsed. Our costume was our Trotters, a white tee shirt, and blue short-shorts; the only articles of clothing that all three of us had.

That evening, after supper, Terri, Evelyn, and I went into the bedroom and put on our costumes. Then we marched downstairs from our second floor apartment to the front of the building, where all the women on the block gathered together at the cement porch to discuss the day’s activities          and solve the world’s problems.

Terri, Evelyn, and I began dancing the Twist in front of them, all the while singing the introduction I had written:

The neighborhood women were delighted by our witty and unique presentation. They wanted more.

“We only have one more song at this time,” I told them. “And we are going to sing that to my sweet mommy. But you can all listen.”

Terri, Evelyn, and I began pumping our arms up and down, all the while dancing the Pony as we sang our song:

Oh, Mommy! Oh, Mommy!
Oh can Terri stay
Overnight with us
Until Monday!
That is tomorrow!

This time the women responded with a thunderous applause. “What a great song!” they agreed. “You will have to write more!” they insisted.

“Why did you sing the song to me?” Mommy asked.

“Because you are the only one who can answer the question,” I explained.

“The one in the song,” I told her. “Can Terri spend the night with us?”

Mommy looked shocked and perplexed, as the women around her began murmuring about the situation and whether the question warranted a yes or a no answer. Some were taking bets on what Mommy would say.

Finally Mommy spoke. “Linda, you know I don’t allow my young’uns to spend the night out or others to spend the night in,” She reminded me. “I got four young’uns, and that’s all I can handle. I do thank you for the song, though. It was real nice. Maybe you can record it one day. Maybe Loretta Lyn will sing it.”

Loretta Lyn never did sing that song. Today it exists only in my mind and on my blog. Not too long after that, though, I did get to spend the night out. But that’s another story.
Posted by Linda Goodman at 4:48 PM 6 comments: