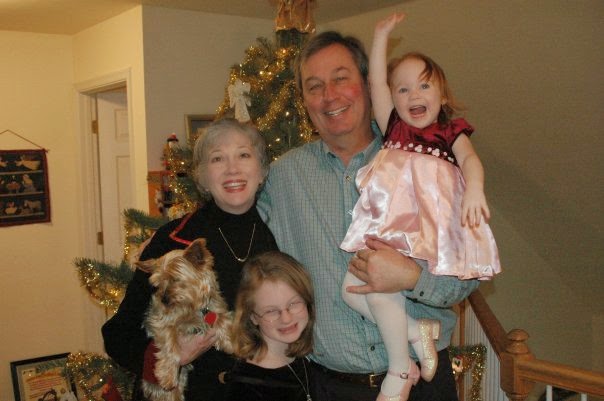 On August 21, 2010, Dalton Duling died.  Duling’s alter ego, Sergeant Santa, was a legend in the greater Richmond area.  A former police sergeant, he spent the last thirty-seven years of his life bringing Christmas to children who would not otherwise have had much to celebrate.
As I read his obituary, I remembered that my husband, Phil, had once worked with Duling’s wife, Dale.   She had given Phil an 8 by 10 autographed glossy black and white photo of Sergeant Santa for our granddaughter Morgan. Phil asked me to put the photo in a safe place until we saw Morgan again.  I put it in a place that was so safe, I forgot where it was.
During a visit when Morgan was five years old, she asked me, “Mawmaw, is Santa Claus pretend?”
I was not quite sure how to answer that question.  I myself had a checkered past with Santa. In the mountains, where I was born, Santa did not come to our small, one-room house. Daddy said that our roof would not support a sleigh with eight reindeer, no matter how tiny they were.
Santa did, however, come through the area on a train, which stopped at various stations along its route so that presents could be dropped off for children in the region.  Several books have been written about the Santa Train.  Most of these books tell joy-filled stories.  Daddy did not allow me or my siblings to go to the Santa Train.  That would have been accepting charity, which my father frowned upon.  We did, however, hear the stories told by friends who had gone to meet the train.  Many of those stories were completely devoid of joy. A small child could get a decent present only if he was accompanied by an older sibling.  Otherwise, the big kids overran the smaller ones in a winner take all scenario. Most of the stories that I heard were heartbreaking.
Santa did come to our house once we moved to the city (for some reason, it was not charity if Santa came to our apartment).  For Christmas in the city, I usually got an orange, a couple of walnuts, and some paper dolls that looked like something my father would have made.  Meanwhile, the rich kids (to me, a rich kid was any kid who lived in a home that wasn’t missing shingles) got Betsy Wetsy dolls and cap guns.  Clearly, Santa liked rich kids better.
My best friend, Carole Ann, spent one Christmas with a foster family. She told me that the real kids got great gifts.  The boy got a set of GI Joe figurines, and the girl got a Candy Fashion doll with three evening gowns (not dresses – evening gowns!).  Carole Ann said all she got was some underwear and a knock-off Barbie doll whose clothes fell apart when she changed them.  I was incensed!  How could Santa show such favoritism when rich and poor were in the same house?  He was downright mean!
When I found out that Santa was not real, I was relieved.  I found it comforting to know that there was no cosmic master of the toy universe who denied poor kids their due at Christmas time.
When I had a child of my own, I decided that she would not be tortured, as I had been, by the Santa myth.  As soon as Melanie was old enough to speak, I taught her to say “No Santa!”  The first time she saw Santa at a shopping mall, though, she pointed at him and insisted, “See, Mommy, he is real!”
I told her to go ahead and sit on his lap, but to be sure to feel the backs of his ears for the hooks that held his beard in place.  She did just that, later admitting, somewhat reluctantly,” It’s true, Mommy.  He’s not real.”
“That right,” I affirmed. “There is no man in a red suit flying through the air in a sleigh pulled by eight tiny reindeer.  Your single mother buys what she can afford for your Christmas.  That’s what all parents do.”


Of course, the next school day she told all her classmates that Santa was a fake.  Her shocked and disapproving teacher gave her detention for the next three days, leaving her traumatized for some time to come.  In fact, eighteen years later, when I walked into her hospital room, my arms reaching for my new granddaughter, Morgan, Melanie held her baby close and growled, “This child will believe in Santa Claus!”
Posted by Linda Goodman at 11:30 AM