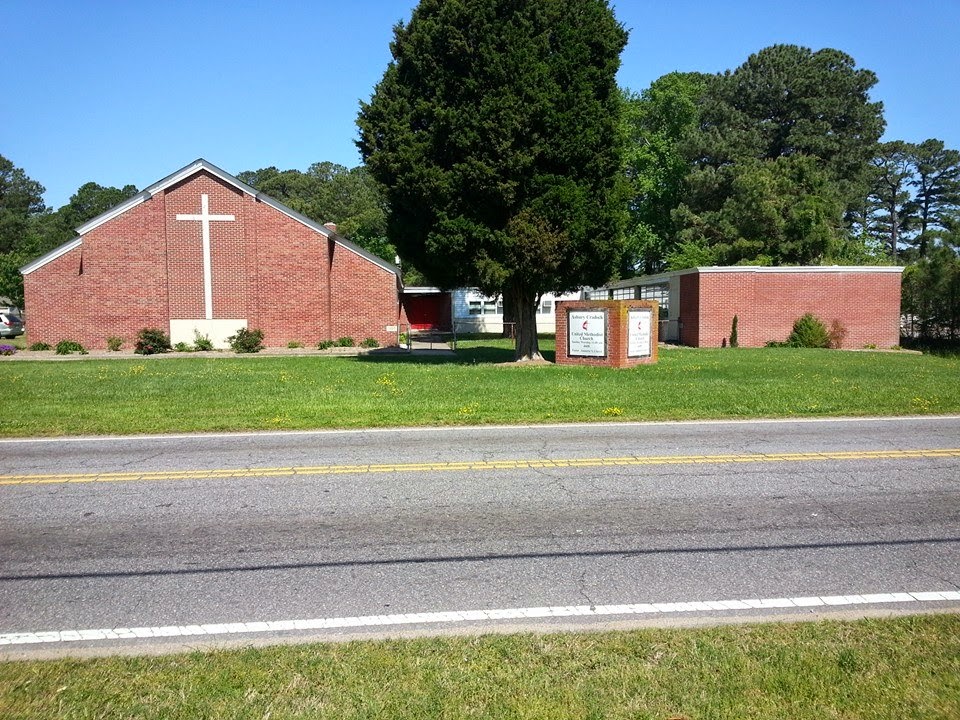 Today, May 18, 2014, Asbury United Methodist Church on Deep Creek Boulevard in Portsmouth, VA is holding its last church service and closing its doors. I attended this church from 1957 to 1983. In fact, Asbury is responsible for my being a Christian today. To honor its memory, I am posting The Dr. Pepper Prayer, which is the story of how I found the church and how it changed my life. It is long, so I will post the story in three parts.

I was born in the Appalachian Mountains of Virginia, but in 1958, when I got to be school age, my daddy got tired of being constantly unemployed and accepted a job at the Norfolk Naval Shipyard in Portsmouth, Virginia.  This necessitated our family’s moving from the Mountains, which we loved, to the city.
In Portsmouth, we settled into an apartment project called Williams Court.  Williams Court had housed military families during World War II, but after the war the housing was converted to low-cost residential rentals.  It consisted of acre upon acre of rectangular buildings shingled in garish colors.  The rental office called the colors aquamarine, buff, and olive green.  We children called them neon blue, baby poop yellow and baby puke green.
Mine was not the only family of transplanted mountaineers living in Williams Court.  In fact, the majority of mountain people who migrated to the Tidewater area of Virginia for jobs settled there, because Portsmouth folks (“city slickers” we called them) did not care much for “hillbillies” in their midst.  We were outcasts, and, as such, we found it wise to stick together.

The grown-ups did not seem to mind being outcasts.  In fact, I am fairly certain that my parents preferred it that way.  We children, however, wanted nothing more than to fit into our new environment.

I figured that once school started, fitting in would be no problem.  After all, the city schools were supposed to have many more children than the little mountain school that we had come from.  With all those children, surely I would not be able to help but make friends.

I was dispelled of that notion during my first day of first grade, when I uttered the word “termite” as part of the answer to a question asked by my teacher.  As soon as those two syllables escaped my mouth, the entire classroom erupted into fits of laughter.  For the rest of that year, my classmates made a game out of trying to trick me into saying words with the long “i” sound in them, so that they could make fun of the way that I talked.  This ordeal launched me on a years’ long journey of teaching myself to talk so that I sounded like everyone else.  By the time I was in middle school, I had accomplished this goal.  It did not matter, though.  I was still an outcast.

There was one place, however, that I fit in perfectly.

On the morning of the first Sunday after we moved into Williams Court, I noticed a group of children gathered together in front of my apartment building.  At first I thought they were getting ready to choose sides for a game a dodge ball, but then I realized that they were dressed too nicely for that.

“What’s up?”  I asked one of the older girls among them.

“ We’re fixin’ to go to that church across the street yonder,” she replied.  With that, she pointed across Deep Creek Boulevard to a pretty little red brick church.  The sign in front of the church read Asbury Methodist Church (This was before we Methodists put “United” in our name.).  “You can go with us if you want to,” she added.

“I’ll have to ask my momma and daddy,” I told her.

“Well, hurry,” she urged. “We don’t want to be late.”
My mother and father had decided not to attend church once we moved to the City.  Daddy had worked in Portsmouth for a few months before he could afford to bring the family over, and he had scouted out churches in the area before we arrived.  The word he sent back to my mother was that the preachers in the city churches did not preach.  They just talked.  What he meant by that was that they did not holler.  In the mountains we had attended a Primitive Baptist church that had been pastored by a long line of hollering preachers.  For some reason that I did not understand, my parents enjoyed sitting in church and getting yelled at.

They did not, however, object when I told them that I wanted to attend Asbury.  Daddy remarked that it “couldn’t hurt.”  Momma helped me get into my best dress, and she put a ribbon in my hair.  She tried to shine my scuffed up brown shoes, but soon realized that was a lost cause.  “Now, Linda,” she warned me, “like as not, some of them city girls are gonna have dresses way fancier than yours.  If they say anything about your dress, you just tell them ‘Well, it’s clean.’”

I ran to join the other children, and we all held hands as we crossed the street.  As we walked through the double doors at the front of the church, several men in suits greeted us.

“ Why, Sally Ann, you look so pretty in that dress.  It’s so good to see you this morning,” said one,

“Tommy, good to see you back, son!  Don’t stay away so long next time.  We’ve missed you,” said another.

I noticed a tall man in a blue suit with a red necktie looking at me.  He had dark curly black hair and horn rimmed glasses. “I don’t believe I know you,” he said. “I’m Mr. Wade.  I’m the Lay Leader here at Asbury Methodist Church.  What’s your name?”
I told him my name was Linda, and then he asked me what grade I was in.  When I replied that I was in the first grade, his face lit up with a big grin.  “Well, you are in for a treat!  You’re in Mrs. Hilton’s class!  She’s the best first grade Sunday School teacher in the whole wide world!”

He took my hand and led me around the corner to a classroom.  I looked inside and saw about a dozen children sitting in little wooden chairs. One little girl looked just like Shirley Temple.  Her golden hair had been arranged in the banana curls made popular by Karen on the Mickey Mouse Club.  Her dress was the color of snow and looked like she had about twenty crinolines under it.  Her black patent leather shoes were so shiny, I was sure that I could see my face in them if I got close enough.  She was waving happily at Mr. Wade, and he waved back before turning to the woman who was standing at the front of the class.

“Mrs. Hilton,” he addressed her, “this is Linda.  She’s going to be visiting your classroom today.”

Mrs. Hilton clasped her hand together and declared, “Well, aren’t we blessed!  I have been praying that we would get another little girl in this classroom.”  She turned to the class. “Class, say hello to Linda,” she instructed them.

“Hello, Linda,” they said in unison.

Mrs. Hilton directed me to an empty chair and I took a seat.  I do not remember what the lesson was about that day, but I do remember that she asked the class questions from time to time, and when I answered one of them, no one laughed.

At the end of the lesson, Mrs. Hilton had us stand in a circle and hold hands for a benedictory prayer. One by one we children prayed out loud.  I prayed a prayer of thanks that God had brought me to a church where the people were so nice.  When it was Mrs. Hilton’s turn, she gave thanks that I had come to her classroom and prayed that I would return and become a regular class member.

As I was getting ready to leave the classroom, I saw the little girl in the snow-colored dress walking towards me.  I figured she was going to ask me why my dress was so plain, and I prepared to respond as my mother had told me, “Well, it’s clean!”

She did not even mention my dress, however.  Instead she introduced herself.  “Hi, Linda.  My name is Lori Ann.  Do you have anyone to sit with in church today?”

When I told her that I did not, she asked me to sit with her and her family, and I agreed.  The two of us walked hand in hand together into the sanctuary and up to a pew at
the front of the church, where she introduced me to her mother, Mrs. Wade, an attractive woman with pale blond hair, wearing a rose colored suit with a matching pill box hat.

“You’ve already met my daddy,” Lori Ann said, pointing to Mr. Wade, who was greeting people at the back of the church.  “He’s the Lay Leader here at Asbury Methodist Church.”

There was that term Lay Leader again.  I had never heard that term before and had no idea what it meant.  Too embarrassed to expose my ignorance by asking, I used my reasoning skills to determine that a Lay Leader was someone who led people into “laying” down and taking naps.

The service began as the organist started to play and the choir marched up to the choir loft in front of the church.  Mr. Wade joined us as the congregation began singing the opening hymn.  The collection plate was passed and I proudly placed the nickel my mother had given me into it.  After another hymn, the sermon began.

Daddy was right about City Preachers.  This one just talked, like he was sitting a kitchen table discussing the newspaper.  That did not bother me, though.  I had never cared much for hollering preachers.

I cannot remember what the sermon was about.  What I do remember is that every once in a while that preacher would look at me, and when he did, he smiled from ear to ear.  Every so often during the sermon, I would look around the church at the folks behind me, and whenever I made eye contact with someone, that person would smile and wave.  Of course, I smiled and waved back.

At the end of the service, after the last hymn had been sung, Lori Ann asked me if I was going to come back for the Sunday evening worship service.

“You mean y’all have church at night, too?” I asked.

“That’s right, Linda,” said Mrs. Wade.  “We have worship every Sunday evening at 7:00.  We also have prayer meeting at 7:00 Wednesday evenings, and the junior choir rehearses at 6:30 on Thursdays.  And, Linda, I would love to have you join the junior choir.  I direct that choir, and I listened to you as you sang the hymns this morning. You have a lovely voice.  I would love to have you sing with us.”

I left that service that morning knowing that I had taken part is a ritual held sacred by a family of hundreds, who would be more than happy to welcome me as a member.

I did come back to the worship service that night.  I also attended the prayer meeting on Wednesday and joined the junior choir on Thursday. On the first Sunday of each month, the church had a covered dish supper before the evening service.  I always got to that service early so that I could be first in line for all that good food.
To be continued.......