The Other Linda Goodman 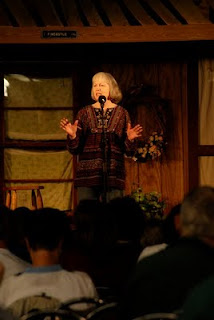 I began my career as a professional storyteller in January of 1989, just two months after attending the first Tellabration!, which at that time was a Connecticut event only. In November of 1989, I appeared as a teller in the second annual Tellabration! in Enfield, Connecticut. The story I shared was The March, which was about my father’s participation in a Civil Rights march in 1966.

I guess the audience enjoyed the story, because the next day my phone started ringing and by the end of the next week I had over a dozen performances booked. I was on cloud nine! As the months passed, I developed a confidence in my storytelling abilities that prompted me to start making cold calls to various venues.

One of the venues that I visited was the Congregational Church on Main Street in downtown Hartford, Connecticut. The good folks there agreed to let me audition to perform at their Wednesday lunch time series, which was very popular with those who worked downtown. The audition committee decided that I should be their entertainment for the Halloween lunch on the last Wednesday in October. I was psyched!

About a week before the Halloween performance, I got a phone call from the Director of the church series. She was so excited she could hardly contain herself. “I can’t believe it!” She squealed. “We are completely sold out!”

I did not know what to think. “Well…...” I stammered, “Storytelling is pretty popular at Halloween.”

“That’s not it!” she retorted. “Almost everyone calling is asking about you. They all want to know if Linda Goodman is really going to be here. They are coming because of you!”

I was astounded. I had been telling professionally for only one year. This would be my first performance in Hartford. How in the world did they even know about me? My vanity answered: When you’re good, word gets around.

On the day of the show, I walked into a room with an audience that had standing room only. Their reactions to my stories were intoxicating. They laughed at all the right spots, gasped and screamed in the appropriate places, and applauded wildly throughout. The response was so overwhelming that my program took twice the amount of time that was allotted. At the end I received a thundering standing ovation that lasted for a good five minutes.

After the show was over, a long line of audience members stood waiting to speak to me. I noticed that many of them had books in their hands. The first woman was so effusive in her praise that I was actually embarrassed. Then suddenly she thrust a book into my hands. “Will you please sign my copy of Star Signs?” she pleaded.

I looked at the book. Sure enough, the author was Linda Goodman, Astrologer.

“I’m sorry, “I told my disappointed new fan. “I’m not that Linda Goodman.” The fact of the matter was that I had never even heard of Linda Goodman the Astrologer.

Word of my true identity filtered back through the line and several angry outbursts occurred. After I recovered from my horror, I actually found them to be amusing:

“How can you call yourself by her name?”

“That’s like saying you’re Wyatt Earp just because you have the same name!”

“But you must have enjoyed my show. You gave me a standing ovation!” I responded.

“That’s because we thought you were her! You’re a fraud!”

In the years since then, I have been mistaken for THE Linda Goodman many times. People just hear the name and make assumptions. It has happened so often that when I get a call or an email from someone I don’t know, inquiring about my work, I make a disclaimer early on: I am not Linda Goodman the Astrologer.

Last week I got a call from someone in Oregon who wanted to know if I would sign her copy of my book if she sent it to me with return postage.

“I’m not the astrologer,” I told her.

“What astrologer?” she asked. “I’m looking for Linda Goodman the Storyteller, the author of Daughters of the Appalachians.”

If only I could see that smug Harford woman again, I would tell her a thing or two. I may not be THE Linda Goodman, but I am certainly THE OTHER Linda Goodman.
Posted by Linda Goodman at 5:27 PM